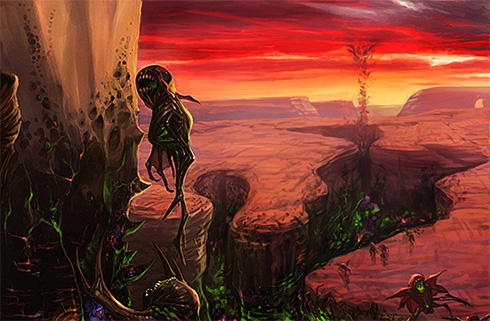 A century ago, when Aroden died, a great rift to the Abyss opened in the centre of what was once known as Sarkoris. Demons spewed from the nightmare realm, all but destroying the nation of fierce, painted warriors and mystical witchery in one fell swoop. The church of Iomedae led other goodly religions in the Mendevian Crusades, but to date the four crusades have done little but stall the incursion of the Worldwound into the rest of the Inner Sea. The strength of the resistance, bit by bit, is fading; if there is no change soon, Deskari’s mighty armies may have the ability to strike out and pierce through the protective wardstones that keep them at bay.

The Worldwound is split into five regions, more or less split down the same provinces of old Sarkoris. Today, only scattered field reports from crusaders can confirm the state of the lands beyond the wardstones.

Frostmire: Occupies the northwest corner of the Worldwound, wedged between boundless tundra to the north and the Realm of the Mammoth Lords to the west. It is a desolate and scarcely-populated frozen land made up of jagged, barren hills and vast, gelid fens. Few demons stalk these lands, but that does not mean that what remains is untouched by their Abyssal taint.

Riftshadow: The Sarkora River, once one of the most heavily-travelled Sarkorian trade routes, supported the most heavily populated region of the nation. Nowadays, the region is a nightmare of ruined cities and Abyssal horrors with demons constantly prowling the riverbanks. This area was the First Crusade’s most hard-fought area as the Sarkorian clans defended their homes, but even they were eventually overwhelmed and forced from their lands. The bulk of the region’s demon cultists dwell here, second only to the Wounded Lands in terms of the concentration and power of the demons who call it home.

Sarkorian Steppe: These barren steppes stretch across the western Worldwound from the Moutray River to the south and the Wolfcrags to the north. This place has always been a no-man’s-land, with constant border struggles between the barbarian Mammoth Lords and the native Sarkorians; now, the only difference is that the humans have been replaced by plagues and demons. The Mammoth Lords send daily raiding parties into the Worldwound seeking demons to attack, stabilising the western boundary and stopping it from spreading further into their lands.

Stonewilds: Little remains of the once immense woodland known as the Forest of Stones, an ancient forest that shielded much of Sarkoris from the Crown of the World’s frigid winds. All that remains of the druidic stronghold are charred husks of trees, petrified stumps, and crumbling and destroyed stone menhirs from an age before. Once upon a time, the Green Faith was born here in these sacred lands; now, the only druids that remain are blighted, undead parodies of their former selves.

The Wounded Lands: Before the Age of Lost Omens, this immense plateau in the centre of Sarkoris was known as the Northmounds. Now, it is largely the iconic network of portal-riddled canyons and chasms that most think of when considering the Worldwound. This place is the centre of the Abyssal taint, and nature is not as it should be here, even the celestial bodies seeming not of this world but of some other reality.

Most of the Worldwound has long been sacked and reduced to rubble; those few cities that remain have been turned into strongholds for one demon lord or another.

Drezen: The lost crusader citadel Drezen is a sad reminder of the overconfidence of the Second Crusade. Thousands were lost in its fall, and the crusader shrines within the city were horribly perverted into demon-altars. Though not far from the border of Mendev, few hold hope of reclaiming the fortress-city for the side of good.

Dyinglight: Once a mystical centre of Sarkorian religion, its great ring of idols honouring Pulura, the occupants of Dyinglight were given warning by their goddess and were able to flee before the demon incursion reached their borders. Today, the abandoned city is haunted by fiendish marsh giants.

Gundrun: Gundrun is an improbability, a free town of Sarkorians who have returned home, and have, to date, managed to exist in the shadow of the Worldwound. Its citizens eke out a meagre existence in this savage frontier, but it is anyone’s guess whether the demon hordes may turn their gazes back towards the south in the future…

Iz: The old capital of Sarkoris, Iz, sits on the precipice of the Worldwound itself, with new buildings and neighbourhoods regularly crumbling away into the Abyss. What was once a bustling centre of craftsmanship is now a covered in dangerous mines and foundries worked by unfortunate sacrifices sent here to die.

Storasta: Once one of Sarkoris’ mightiest cities, now it is little more than a decaying heap of crumbling ruins blacked by Abyssal fires and overgrown with putrescent moss and thorny tangles.

Undarin: The many bridges of the trade centre Undarin bestride the now-befouled Sarkora River, its markets turned into slave pens and grand temples into desecrated barracks. The herdsmen with their flocks and the miners and stonecrafters from Iz have been replaced with terrified slaves and prisoners forced to play at living a real life for the amusement of their captors.