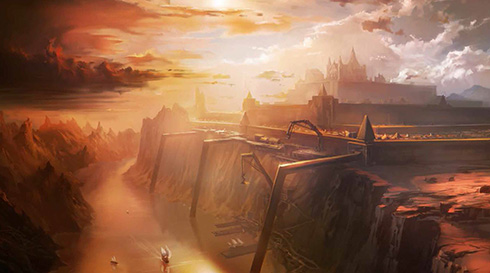 Kenabres is a large city of both glory and darkness, being host to both some of the most righteous camps of crusaders and the most maladjusted mobs of witch hunters alike. It is also the site of one of the powerful wardstones that shield the countries surrounding the Worldwound from the demonic hordes that threaten to overrun their lands.

Kenabres is essentially made up of four districts radiating out from oldest at the centre to youngest on the outside. It sits upon a tall cliffside overlooking the banks of the West Sellen River.

The original town that existed prior to the Crusades causing the dramatic swelling of its population. It mostly hosts houses of old families whose lineage traces back hundreds of years, as well as the city’s official administrative buildings (such as the courthouse, city hall, and garrison). The architecture in this district is well-constructed from heavy stone in the style of ages past.

The Cathedral of Saint Clydwell stands in the centre of the entire city. It honours Saint Clydwell, a champion of Iomedae who sacrificed himself to seal a horde of demons within an inescapable prison. The Temple of Iomedae is erected on the opposite side of the district, and serves the common folks’ religious needs.

The second tier of the city encircles Old Kenabres; it has been here since the beginning as well, but back then it was not a walled district but merely surrounding farmlands. It largely consists of more homes and administrative buildings (such as the hall of records and water pump maintenance building). A steep switchback road named Davon’s Ramp leads from the Ring District’s eastern edge to the lower-elevation districts of New Kenabres and the Gate District.

In the south of the district, the Alodae Amphitheatre provides some entertainment and distraction from the horrors of constant war. It overlooks Truestone Park, a peaceful site of greenery surrounding an artificial lake. Ring District also hosts the two-story stone keep that houses Kenabres’ wardstone.

Built during the initial flood of refugees after the opening of the Worldwound, it is largely made up of more modern-looking residential buildings built from stone. It also hosts the majority of the city’s warehouses (many of which are built near Warehouse Square in the southwestern corner of Kenabres).

The Tower of Estrod, located in New Kenabres, is the former home of a historian of the crusades; nowadays it is occupied for short periods by other researchers and wizards in need of a library and secluded locale. The Hall of Heroes is situated here as well, a magnificent building featuring stone statues of laurelled heroes and plaques engraved with the names of the dead.

The largest district, it arose a decade after New Kenabres to support the city’s burgeoning population. It includes a mix of residential and commercial buildings as well as wealthy family homes. Temples to Abadar, Sarenrae, Shelyn, and Torag sit alongside smithies, stoneworks, and woodshops.

Defender’s Inn, the largest such business in Kenabres, is located towards the west of Gate District. It caters particularly to mercenary companies and crusaders. The Librarium of the Broken Black Wing is positioned at the southern end of the district; it is the premier library for demonology and planar travel research in Mendev.

Located approximately 10 miles east of Kenabres, the quarry is essential for the city’s economy and defenses. Guards are in high demand to protect the caravans shipping the stone from quarry to city from demon attacks.